University of Szeged Directorate for R&D and Innovation

After the success of the first Science without Borders Conference, the second was held in Budapest between 8-9th June.

Currently, one of the world’s biggest scholarship programs is the “Science Without Borders Program”, which is fully funded by the Brazilian government. In Hungary, it is coordinated by the Hungarian Rectors’ Conference and attracted almost 2000 Brazilian students in the academic years of 2013/2014 and 2014/2015 to twenty Hungarian higher education institutes. With this high number of students, Hungary is the 10th most popular country of destination out of the 40 host countries.

In August 2015, 680 Brazilian students are going to finish their studies, which also include an internship period provided by the scholarship. The Hungarian Rectors’ Conference organized the “Second Science without Borders Conference on Brazilian-Hungarian Academic and Scientific Cooperation” to conclude the academic year of 2014/2015.

The first conference was held in January 2015, before 700 Brazilian students went back to Brazil. The venue of the conference was the Budapest Business School and was also organized by the Hungarian Rector’s Conference. The purpose of the event was to provide a scientific forum for the students, where they can summarize their time and studies spent here, in Hungary.

Due to the success of the firs conference, the “Second Science without Borders Conference on Brazilian-Hungarian Academic and Scientific Cooperation” was also held in the Budapest Business School 8-9 June 2015. The Plenary Session was held in the morning with the contribution of the Campus Hungary Program and the Hungarian Rectors’ Conference. These associations invited and provided lecturers for the Plenary Session. 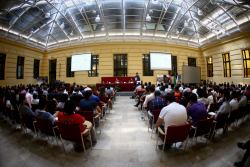 The most Brazilian students of the University of Szeged were present on the first day of the conference, where Dr. Zoltán Dubéczi, the Secretary General of the Hungarian Rectors’ Conference, welcomed the guests and introduced the first two years and accomplishments of the “Science Without Borders” scholarship program. After the speech of Dr. Zoltán Dubéczi, Zoltán Major introduced the “Prezi” presentation making application, which was a great demonstration of a widespread Hungarian invention. The students also had the opportunity to listen to Hungarian teachers and researchers under the chairmanship of Prof. Dr. Péter Závodszky. The scholars presenting were Dr. Dávid Szűcs (Hungarian Academy of Sciences – Research Centre for Natural Sciences) and Dr. Bálint Mészáros (ELTE, Hungarian Academy of Sciences – Research Centre for Natural Sciences). Thereafter two students, Jozefina Maróti and Miklós Diósy, from the College of Kecskemét introduced the students their MEGALUX project. Finally, Dr. Tamás Bene (University of Debrecen) summarized the researches, their outcome and their applications at universities.

During the two days of the conference, more than 550 Brazilian students participated. For some students, it was the first opportunity to participate in such a huge conference and to listen to English scientific presentations. It was also a great opportunity for them to present their personal impression and scientific study in front of a bigger audience. At the end of the day, every student got a certificate for participation.

According to the feedback from the participants, due to the exceptional work of the organizers, this conference was a good basis for the future cooperation and relationship between Brazilian and Hungarian scholars.

The University of Szeged has joined the Demola Global Innovation Community, within the framework of the USZ Virtus Enterprise Catalyst Program, which aims to create a young, open, multidisciplinary community that works with creative ideas and methods to solve real market problems.